From “Focus on DR,” which appeared in the most recent January 2020 edition of the ABR’s newsletter, The BEAM:

Over time, diagnostic radiology has evolved, and imaging techniques and exams have changed.  Computed tomography (CT), magnetic resonance imaging (MRI) and ultrasound improved and replaced many traditional exams. The practice of many diagnostic radiologists now consists of work that was not tested on the exams they took for initial certification. A way to see that radiologists have evolved along with their practices and acquired these new skills is needed. Such a system must be meaningful, yet not be onerous for physicians to complete.

This is a fascinating statement. Fascinating because those radiologists with initial certifications that reflect a bygone era of “traditional exams” are in fact grandfathered from the very system “needed” to confirm that they’ve evolved.

There are few things less evidence-based since medical antiquity than contrast-fear and contrast-management. We are slowly, slowly, as a field trying to correct long-held mistakes based on bad correlative science.

Intravenous iodinated contrast media are commonly used with CT to evaluate disease and to determine treatment response. The risk of acute kidney injury (AKI) developing in patients with reduced kidney function following exposure to intravenous iodinated contrast media has been overstated. This is due primarily to historic lack of control groups sufficient to separate contrast-induced AKI (CI-AKI; ie, AKI caused by contrast media administration) from contrast-associated AKI (CA-AKI; ie, AKI coincident to contrast media administration). Although the true risk of CI-AKI remains uncertain for patients with severe kidney disease, prophylaxis with intravenous normal saline is indicated for patients who have AKI or an estimated glomerular filtration rate less than 30 mL/min/1.73 m2 who are not undergoing maintenance dialysis. In individual high-risk circumstances, prophylaxis may be considered in patients with an estimated glomerular filtration rate of 30–44 mL/min/1.73 m2 at the discretion of the ordering clinician.

From the new “Use of Intravenous Iodinated Contrast Media in Patients with Kidney Disease: Consensus Statements from the American College of Radiology and the National Kidney Foundation.”

The risk of CI-AKI (née CIN) with iodinated contrast for GFR > 45 is zero and for 30-44 probably close to zero as well. If your patient would benefit from intravenous contrast, there are few reasons to avoid it when it will provide meaningful clinical value.

In related news, having one kidney does not matter for contrast safety if that kidney is functioning.

If you’ve been keeping up, the original motion to dismiss filed by the ABR was granted by the court, basically parroting the similar intially dismissed case filed against the ABIM.

The Honorable Jorge Alonso’s opinion was basically: “I’m not convinced initial certification and MOC are separate products. They seem like two parts of one product: ABR certification. That used to be a one-time thing and now it’s not—tough luck.” As such, you can’t illegally tie the two components together if they’re really two aspects of one thing. The logic rests largely on the established interpretation of the Sherman Antitrust Act that if there is no separate market for the contended service, then you can’t argue that it’s an illegal tie-in. Everything else in the complaint either relies on that to matter or was a “conclusory” allegation (an accusation not demonstrably supported by facts).

The amended complaint, dated January 24, 2020, spends a lot of time describing MOC in lines of another umbrella term: a continuing professional development (“CPD”) product (i.e. CME). Just because you creatively title your CPD product “MOC” after selling one-time initial certifications for over half a century doesn’t change what it is. The amended complaint says that MOC is basically a CME product, and, hey, look, there are tons of those around and a robust market to buy them. While doing so, the plaintiff attorneys also point out that none of those other CPD providers sell initial certification. Therefore, ipso facto, there is a separate market, and the ABR is being naughty.

Everything in the suit, including the relevance of some of the great zingers in the filing, rests on convincing the judge that IC and MOC are different products. There may be a practical monopoly, but so far no judge in these ABMS lawsuits has been interested in allowing a challenge to the party-line interpretation to stand and let these suits go to trial. To progress, MOC must be interpreted as just another CPD product. Without that, it’s all dead in the water, and interesting bits such as the inbreeding between the National Committee for Quality Assurance (NCQA) and the ABMS (page 17) don’t get to make it to a jury’s ears (and I suspect a trial would probably be more of a downhill victory in court than the case getting through the judge to a trial in the first place).

For Alonso, I suspect it will be hard to convince him that MOC = CPD. Clearly MOC is basically CPD, but not all CPD is exactly “MOC” at least so far as MOC has been engendered by the ABMS specialties (whether that form is meaningful or valid, unfortunately, is something the judge had no interest in entertaining in his granting of the defense’s motion to dismiss). It’s not the ABR’s “fault” that its “voluntary” certification product has become a requirement for hospital credentialing or insurance panel acceptance.

I mean I’m pretty convinced, and the history outlined in the suit is both instructive and compelling (seriously, read it), but I’m just a radiologist.

And while there is more supporting evidence provided in the amended filing (e.g. see the interesting points 51-56 starting on page 12), there’s also nothing here to force him to change his mind. The ABR can argue, bullshittingly, for example, that MOC includes both a knowledge assessment, CME compliance, and a QI project component and is, therefore, a more holistic view of the practicing radiologist. We know this is largely nonsense. The ABR is a profitable question-bank company where the questions are largely written for free by volunteers. But that fact doesn’t necessarily mean the ABR itself cannot change the terms of its own certification product.

And what’s really at stake here?

Plaintiff asks only that ABR be prevented from revoking the certifications of radiologists who do not also buy MOC, and that ABR report, without any qualification, whether radiologists have purchased an ABR certification, regardless of whether they have also later bought MOC.

I’m not that hopeful anything like that will come to pass.

But a real solution that could actually benefit the field of radiology would probably need to be one of two (or both things): a well-organized competing board with a clearly superior product that gets buy-in from residencies and the ACR and subsequently organizational and licensure stakeholders. I believe this would need to include initial certification to really have a chance of meaningful impact and is extremely unlikely (after all, the ABR managed to get the fledgling “National Board of Radiology” shut down within a few months of its creation). Or, continued grassroots opposition culminates in serious ABR structural reform. This would also likely require substantial and unyielding support of the ACR and other radiology organizations.

But since you’re here, I’ve pulled some choice quotations for your reading pleasure:

Through 2017, the last year for which data is publicly available, ABR has forced tens of  thousands of radiologists to buy its redundant, worthless, and superfluous CPD product or have their certifications revoked, realizing an estimated $90 million in MOC-related fees and revenue as a result.

According to a medical journal article written by three ABMS employees in 2016, “underlying the creation” of this new product was its emphasis, unlike certification, on “performance in preference to knowledge” with its “focus on improvement rather than on elimination of candidates” for entry into a specialized practice of medicine.

So, yes, exactly what you would expect: multiple-choice questions.

If instead of the labels “initial certification” and “maintenance of certification” the original and accurate terminology of “certification” and “continuous professional development” is substituted, ABR’s tying, forcing, and other anti-competitive conduct becomes clear. Creative product labeling cannot insulate ABR from the truth that certification and MOC are separate and distinct.

Thus, MOC is nothing more than a device to force radiologists to pay tens of millions of dollars in MOC-related fees for a redundant, worthless, and superfluous CPD product.

Little information has been made available by ABR about how radiologists will know whether they are “passing” OLA, other than that the “passing standard” will “vary slightly” among radiologists, without an explanation of what “slightly” means.

If OLA is criterion-referenced via Angoff panels as the Core and Certifying exams are reported to be, then the passing thresholds should be set ahead of time (even if that threshold is a binary TBI or no?) Assuming questions of varying difficulty are administered in the correct frequencies, there should be a predetermined true percentage correct passing threshold. Well, what is it?

In short, radiologists need spend as few as 52 minutes per year (one minute for each of 52 questions) answering only those questions they choose to answer, that are designed so as not to require studying, and for which ABR anticipates neither incorrect answers nor a high failure rate. Because OLA has been designed so that all radiologists pass, it validates only ABR’s ability to force radiologists to purchase MOC and continue charging supra-competitive monopoly prices for MOC.

ABR is not a “self”-regulatory body in any meaningful sense for, among other reasons, its complete lack of accountability. Unlike the medical boards of the individual States, for example, as alleged above, ABR is a revenue-driven entity beholden to its own financial interests and those of its Governors, Trustees, management, officers, and employees. ABR itself is not subject to legislative, regulatory, administrative, or other oversight by any other person, entity, or organization. It answers to no one, much less to the radiologist community which it brazenly claims to self-regulate.

It took about 9 months for the initial dismissal, but I suspect we’ll have some more news in the spring.

I don’t normally talk much about the places I work or the institutions I’ve been affiliated with on the site. After all, these views are my own.

But I’m just going to drop this here briefly because I’ll freely admit that I was honored and gratified to win Teacher of the Year my first full year as faculty at Baylor Dallas. Great group of residents. 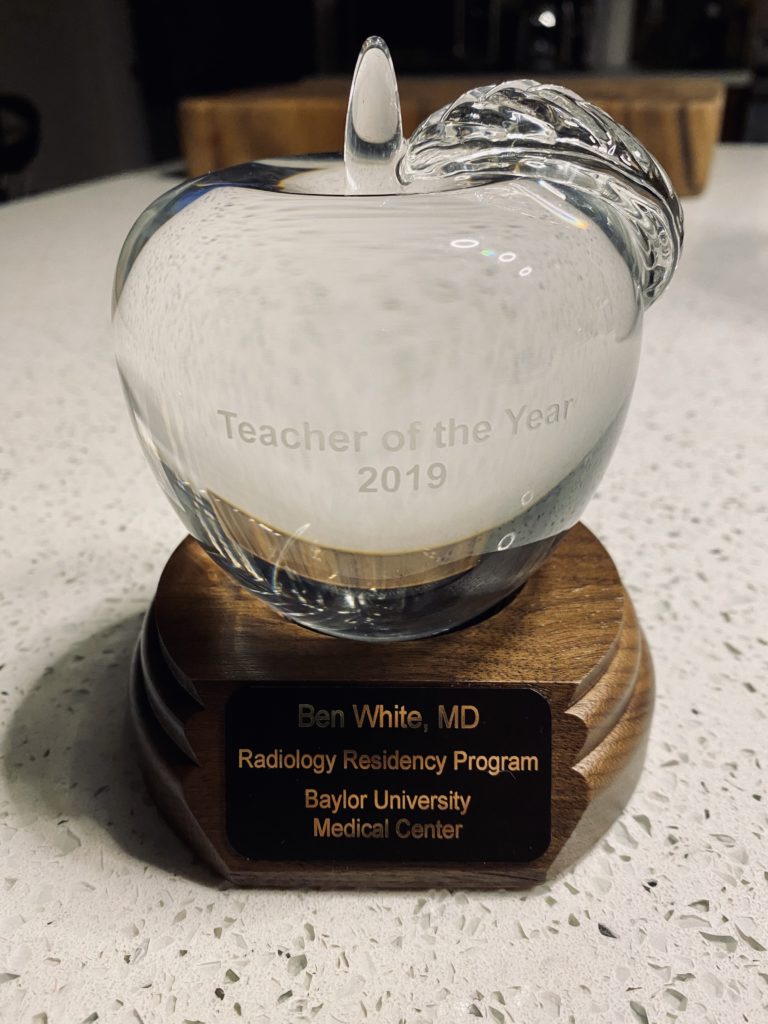 On November 18, a federal judge has granted the ABR’s motion to dismiss for the lawsuit filed this February. Judge Jorge Alonso was unconvinced by the argument that the ABR has illegally tied its MOC product to its initial certification product, agreeing with the ABR that the two things are really two parts of the same thing (despite the fact that for lifetime certificate holders…they’re not):

Ultimately ABR sells only one product: certification of radiologists as having ‘acquired the requisite standard of knowledge, skill and understanding essential’ to the practice of medicine in their particular specialty or subspecialty. This was once a one-stage process, and it is now a multi-stage process, but it does not follow that the certification process consists of separate products; now as ever, there is only one product.

You can read a quick summary from Radiology Business.

Ultimately, there is a wide gulf between the things that are unethical or morally repugnant and those that are unequivocally illegal such that a court will reliably provide a ruling that coordinates with common sense or layperson expectations.

With how dysfunctional our national legislative bodies have become, people have forgotten that the courts are supposed to be more of a last resort than a primary hope.

Across all critical issues, we can’t rely on appointed judges to make things right.