My patient gave me a thumbs-up. I wished that I had known him better. “Cheers,” he said. 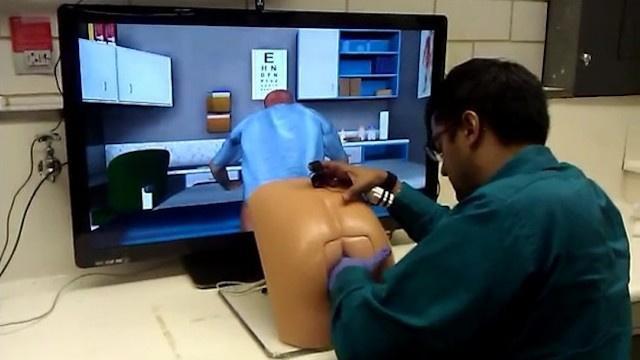 The future of prostate exam training is here, and his name is “Patrick.” Half sensor-embued tush-model and half computer-simulated cartoon-man, Patrick promises to grade medical students on their technique while also “present[ing] a realistic patient encounter” including “software that enables him to interact emotionally with the student.” (Before the exam begins, he tells you how scared he is.) [via Medical Daily]

Atul Gawande1of Being Mortal and The Checklist Manifesto fame, writing about useless medical care for the New Yorker:

One major problem is what economists call information asymmetry. In 1963, Kenneth Arrow, who went on to win the Nobel Prize in Economics, demonstrated the severe disadvantages that buyers have when they know less about a good than the seller does. His prime example was health care. Doctors generally know more about the value of a given medical treatment than patients, who have little ability to determine the quality of the advice they are getting. Doctors, therefore, are in a powerful position. We can recommend care of little or no value because it enhances our incomes, because it’s our habit, or because we genuinely but incorrectly believe in it, and patients will tend to follow our recommendations.

Interesting, in an otherwise thoughtful and well-written essay (as always), Gawande never once mentions fear of medical malpractice as a component that is driving useless healthcare utilization. His best anecdotal examples come from surgeons and proceduralists, who in private practice have an incentive to operate. The family doc, on the opposite end of the spectrum, doesn’t have a direct monetary incentive to order non-indicated radiological exams.

He also never mentions the “patient as consumer” either. Keeping private paying patients happy is the only real monetary incentive most providers have. The argument he references above is that doctors have the power and are (inherently?) inclined to over-test and over-treat. But anyone who has tried to not give antibiotics to someone with a viral URI knows that patients often go to the doctor to get what they want, not to find out what they need.

From Julia Belluz’s portrait of Dr. Oz in Vox, now apparently America’s most famous and most trusted physician:

This setback didn’t slow down Oz in his study of alternative medicine — or his embrace of fame. In the early 2000s, he worked with a reiki healer named Raven Keyes. She told me recently, “My reiki master is the archangel Gabriel. All I have to do is ask Gabriel to activate all the angels, and everybody’s angels come to life.” In the operating room, she said, she’d perch on a stool behind the anesthesiologist and transfer her good energy. “I’m connecting with the divine light within me and allowing myself to absorb the divine light in myself so it expands outward.”

Dr. Oz embodies the tension between personal freedom and professional responsibility. If one-way communication via a television or radio show doesn’t qualify as medical advice or constitute a physician-patient relationship, then how do we define it? Because anecdotes are apparently not uncommon about people who trust Oz via TV more than their actual physicians:

One reported that her dad had a heart attack and five stents placed in his heart, which required him to take aspirin and Plavix to prevent blood clots. “He was watching Dr. Oz, who said Plavix was not necessary, so he stopped taking it. About a month later, he had another massive [heart attack] and coded and had to be shocked back to life.” She continued: “My dad admitted to following Dr. Oz’s advice and not asking his own cardiologist.”

When a personality like Oz speaks about health and is a physician, he or she is essentially doling out medical advice. But right now, we wouldn’t even consider holding them accountable. Oz doesn’t even need to disclose his COIs when it comes to fat busting green coffee bean extract or other natural miracles.

Update: John Oliver weighs in on the most recent Oz controversy, as Oz responds to his critics who want him off Columbia’s faculty.

And if you haven’t already seen it, Oliver’s awesome original Oz segment.

Ragnar Kristoffersen, an anthropologist who trains Norway’s correctional officers, quoted in a fascinating NYTimes piece about a different kind of maximum security prison:

He leaned back in his chair and went on. “We like to think that treating inmates nicely, humanely, is good for the rehabilitation. And I’m not arguing against it. I’m saying two things. There are poor evidence saying that treating people nicely will keep them from committing new crimes. Very poor evidence.”

He paused. “But then again, my second point would be,” he said, “if you treat people badly, it’s a reflection on yourself.”