Here we review Prometheus Lionhart’s multipart book series for the Core Exam. If you’re interested in someone’s thoughts on the Titan Radiology video series, you’ll have to look elsewhere.1I don’t think people need another video course, particularly since if you want a video course, the UCSF videos are solid and most programs have access to them. I’ve spoken to exactly one person who did Titan and they said it wasn’t worth the money. I’m sure it’s fine/good, but I’d guess they’re probably right.

TL;DR: Every book in the Crack the Core series is generally humorous, relatively engaging, high yield, and conversational—as well as full of typos and (mostly minor) errors.

Crack the Core (volume 1 and volume 2) by the eponymous Prometheus Lionhart is like the First Aid of the Core Exam, if First Aid was written by a single author with a foul mouth and had a seemingly infinite number of typos. Overall, it’s great. This is now the de facto universal source for the Core Exam in part because it’s both concise and very memorable, and in part because there are few alternatives. Here is an example of Lionhart’s style from the GU section:

Multilocular Cystic Nephroma – “Non-communicating, fluid-filled locules, surrounded by thick fibrous capsule.” By definition these things are characterized by the absence of a solid component or necrosis. Buzzword is “protrude into the renal pelvis.” The question is likely the bimodal occurrence (4 year old boys, and 40 year old women). I like to think of this as the Michael Jackson lesion- it loves young boys and middle aged women.

If that works for you, then buy this book. His crude diagrams are stylistically ugly but effective. The book is light on images—it’s really a text and diaphragmatic discussion of topics geared for the Core as if your wise senior resident was giving you the low down (e.g. there is no image to accompany that fantastic discussion of multilocular cystic nephroma). As a result, you may want to read along with statdx or radiopaedia to give yourself the imaging context, as well as need to either do a qbank or casebooks to actually round out your prep. But, on the plus side, the sense of humor and tone are unique enough to make reading CTC a relative breath of fresh air.2if you annotate it and read it over and over, then this starts to get old, especially as some of it falls flat. There is a slight emphasis on topics that were popular on the oral boards that I’m not sure are likely to appear again, but overall the content is high yield and sufficient. The font is huge and there’s lot of white space—it reads fast.

On the downside, there are an incredible number of typos, most of which are really lazy, kinda pathetic, and non-substantive. As in, even by the third edition, he hasn’t run spell check. He also has no idea how to use a comma properly. Portions of the book, particularly for brief passages about rare conditions, are essentially just plagiarized radiopaedia articles put in brief paragraph form. Even the fun zebra head symbol is only intermittently placed next to zebra conditions for which he uses it. For better or worse, Lionheart (did I mention that is the coolest name ever?) clearly doesn’t care. He knows it’s still worth reading.

While most typos are merely distracting, some do confuse the issue (e.g. by turning a fact into its opposite), so CTC is probably safest after you’ve done some other review (but overall fine alone). There are plenty of black pearls, though overall not nearly enough to matter if you otherwise learn the material well, and many cases, you’ll spot them obviously. One fantastic example in a gamesmanship box from nucs:

Q: How do you grade this unilateral perfusion defect (of the whole lung), but no ventilation defect?
A: It’s technically high probability.

It’s actually (technically) low probability, which is only funny because this is clearly a shout-out to a specific classic oral boards question/recall, and it’s just wrong. This kind of error is rare, and a single author book without any editorial input is bound to have mistakes. There’s no way to avoid that, and even books from the big boys often have errors. While there is an errata page on the Titan Radiology site (that requires registering an account to see), it’s woefully incomplete. CTC demonstrates an almost aggressive lack of polish. This isn’t meant to teach you to be a good radiologist, it’s meant to help you pass a test.

If a source disagrees with CTC, the source is probably right. Specific numbers can be wrong or out of date (making them less likely to be tested too), and incomplete descriptions of facts are also common, but again this is a review text for high-yield Core review, so I completely forgive the tailored approach. The book is chock full of a large number of buzzword descriptions, which are only really helpful in the context if you are able to pair the classic buzzword with it’s a classic imaging appearance. This is an image-based written test, so they’re not going to tell you how something looks, they’re going to show it to you. So to use this book most effectively, you’d need to look up every buzzword and sign so you can put a picture to it. I don’t always agree with his assessment of likely test questions, but this is one resource written to get you thinking along those lines (which is helpful, in addition to actually doing practice questions).

CTC is available as two-volume set on Amazon via its CreateSpace self-publishing platform. This means that it’s printed on demand per order on crappy copy paper with abysmal production quality (makes the terrible image quality even worse). Compounded by Prometheus’ design sense, CTC is easily one of the ugliest books I’ve ever read.

There are weak Amazon previews for any CTC books, which may be frustrating to potential buyers. Unfortunately, there are also no ebook versions, which may be related to his desire to avoid piracy (an impossible goal) or more likely, because Amazon’s royalty schema for e-books discourages pricing in a range that would be compatible with his profit goals given the price of the print edition.3In case you’re curious, Amazon pays a 70% royalty on books priced $9.99 or less and 30% on books greater than $10. Thus a $23.50 and $10 e-book actually pay the same royalty rate. His return on a $45.52 version of the 382-page War Machine is approximately $21.88. He would need to charge around $67 ($20 more!) in order to generate the same profit from an electronic version. This is one of the downsides of the Amazon de facto e-book monopoly. Apple and Kobo pay a flat percentage.

Sales of both volumes are intermittently on hold for the release of updated editions. Unless you plan on actually using it in the fall—which isn’t necessary–I would avoid buying a used copy and hold off until the updated editions are released late in the year (if desperate, borrow a copy from your seniors). Not only do I hold a sincere hope that PL will finally take his errata and typos seriously, but there is an ever-growing list of high yield trivia in each section that are presumably generated from reader…feedback.

Update – Physics/NIS were removed from CTC-V2, so now you are forced to buy all three volumes, making some of the comparisons below irrelevant.

War Machine is a stand-alone expansion of CTC physics and non-interpretive skills. Both these topics were covered well in CTC Volume 2. To give you an idea of the page difference involved:

And to be honest, much of the text is exactly the same. In fact, whole pages are literally pixel by pixel identical (even the typos): 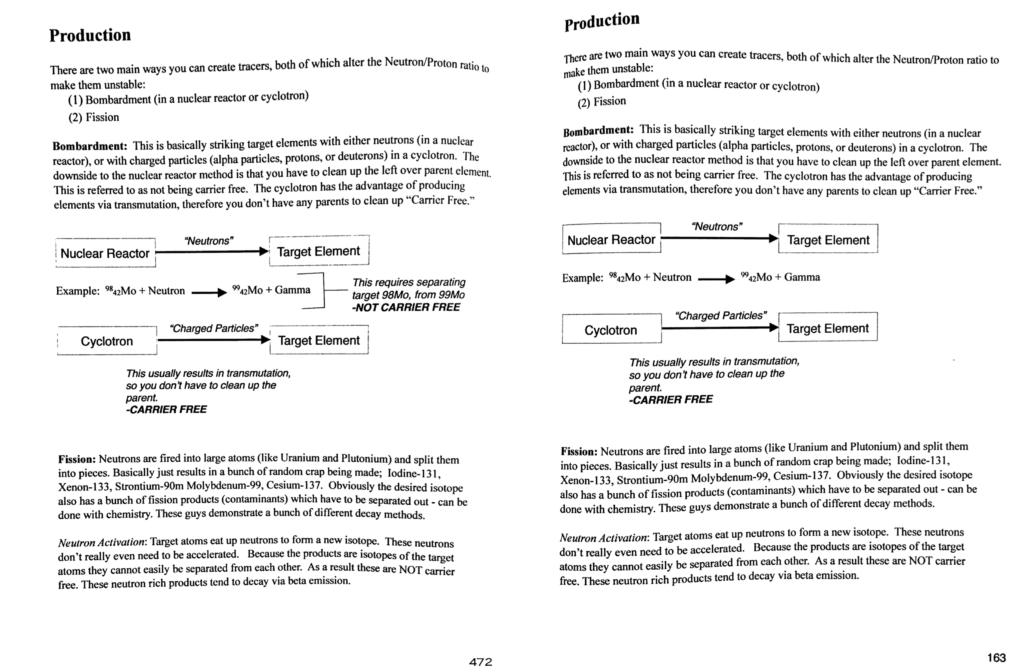 Most of the diagrams are the same and are similar in number. Some topics get a little more love, but overall the content is essentially the same, and I didn’t notice anything magical in War Machine that simply isn’t in CTC. Some of the fleshed out material is probably low yield, particularly some of the nitty-gritty stuff that is less clinically relevant and thus less tested on this “Exam of the Future.” The fun testable trivia bits appear basically identical.

An example of an additional breakdown that only appears in War Machine: 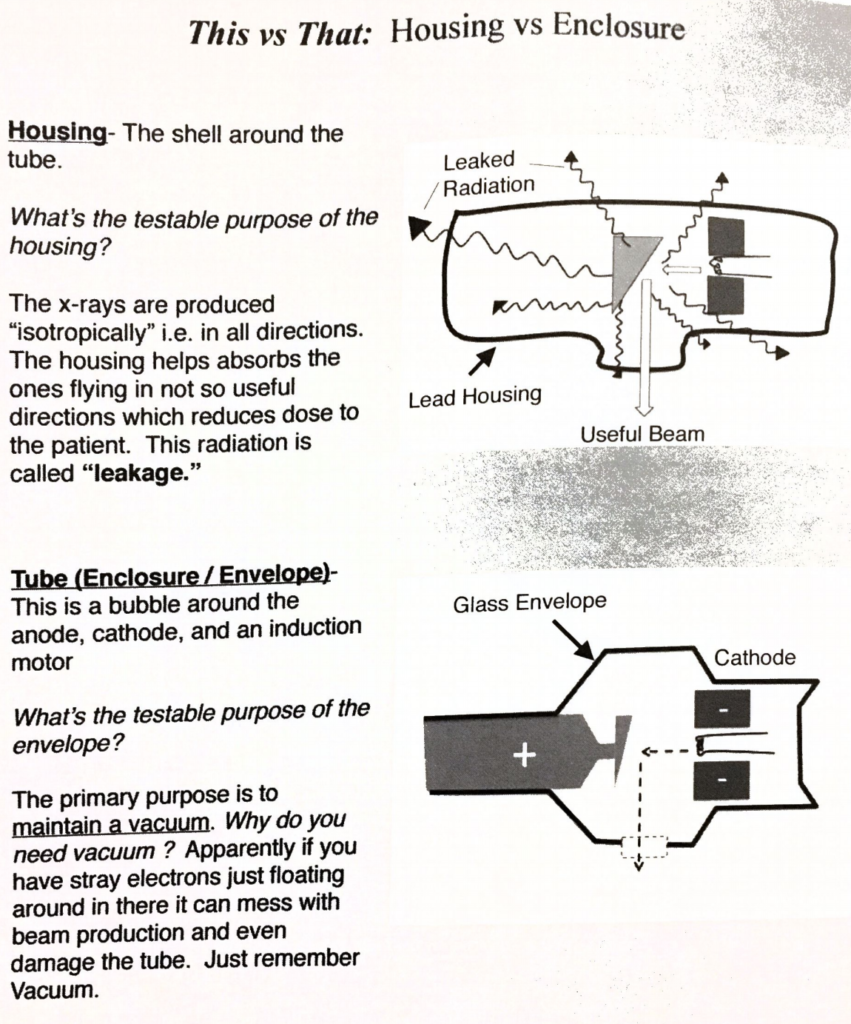 Helpful breakdown? Probably. Demanding of a whole page of additional explanation? Probably not?

War Machine’s pro/cons are identical to CTCs: It’s very funny (particularly the NIS section). There are an incredible number of typos. A few of these affect understanding (saying positron when you mean beta particle), but most are just sloppy. Again, a serious dearth of images, but there are lots of nice crudely drawn diagrams. There are very few clinical examples with pretty wimpy artifact sections. It, like CTC in general, reads very fast due to big font and generous line spacing.

So in the end, War Machine is probably a bit better if you’re physics background is poor (or you have none), because it’s slightly less summarized/concise. Both books are essentially a re-writing of the relevant RSNA physics modules into as much plain English as possible and do an excellent job. If you’ve done the RSNA modules, then War Machine’s main selling point over just reading CTC is the high yield rapid review section at the end (note: this is just duplicated high yield tables and charts clumped together, but it’s nice to read right before the test). There is nothing new in the rapid review, just a convenient copy-paste job.

Given that physics is the most commonly failed section and currently the only thing you can condition for, it makes sense to take physics very seriously. If you want to work War Machine into your studying, you could conceivably do so in the beginning to finally (after years of training) to try to understand physics, then read the shorter CTC sections during your dedicated review closer to the exam. Or just read War Machine and skip the CTC section. But this is a safe pass if neither of those scenarios appeal to you. It just isn’t crucial: they’re so similar where it counts.

Both versions include a fair amount of nitty-gritty details that from my experience were simply not on the Core, which really does have largely clinically relevant physics focused on dose, safety, image quality, and image manipulation. Both are definitely more on point than Huda. Conversely, neither resource emphasis the relative dose of various exams (i.e. how many mSv is the effective dose of an average chest CT), which is important material for the Core.

On a personal level, War Machine + Physics 300 were enough for me to easily pass physics on the exam. I enjoyed the extra bit of depth and used it to replace (not supplement) the CTC section.

Verdict: Plus/minus. A pleasant but not critical addition if you have/read CTC.

The CTC Case Companion helps flesh out the fact that CTC is impressively not image-rich for a radiology text. 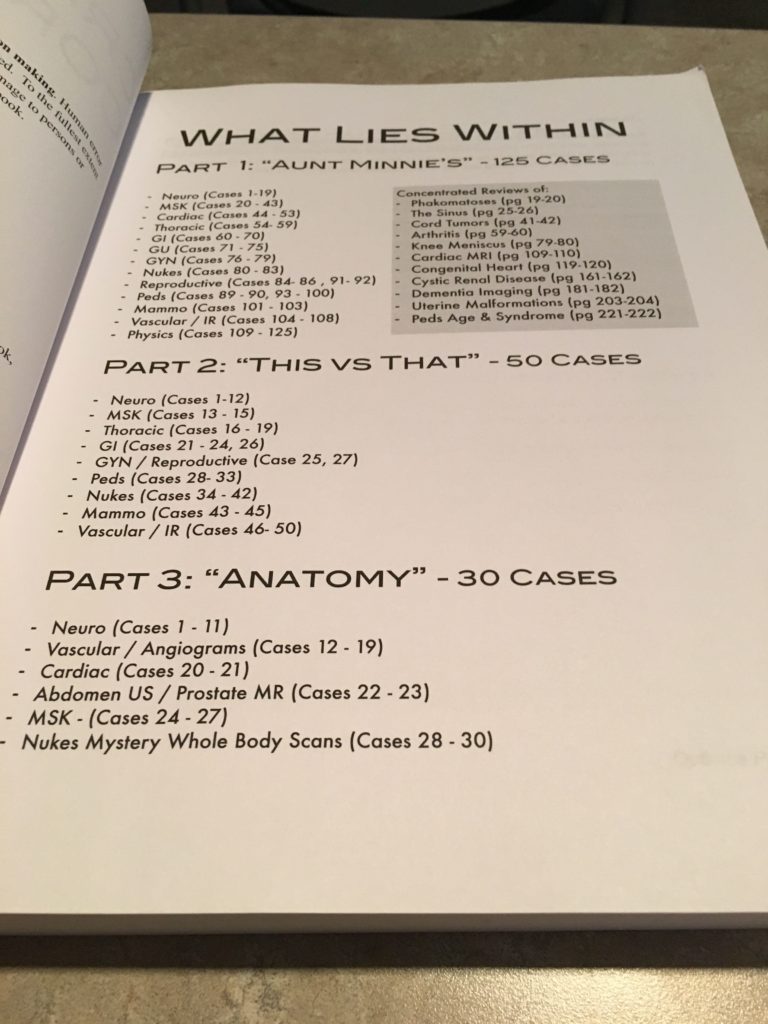 125 Aunt Minnie cases, 50 comparative “this vs that” cases (e.g. cholesterol granuloma vs. cholesteatoma), and 30 high yield anatomy asked in the context of 600 multiple choice questions with integrated physics for ~$30. Great book of low-hanging fruit, solid value. Again, intermittently funny but full of mistakes, like this awesomely reversed labeling of Galeazzi and Monteggia fractures: 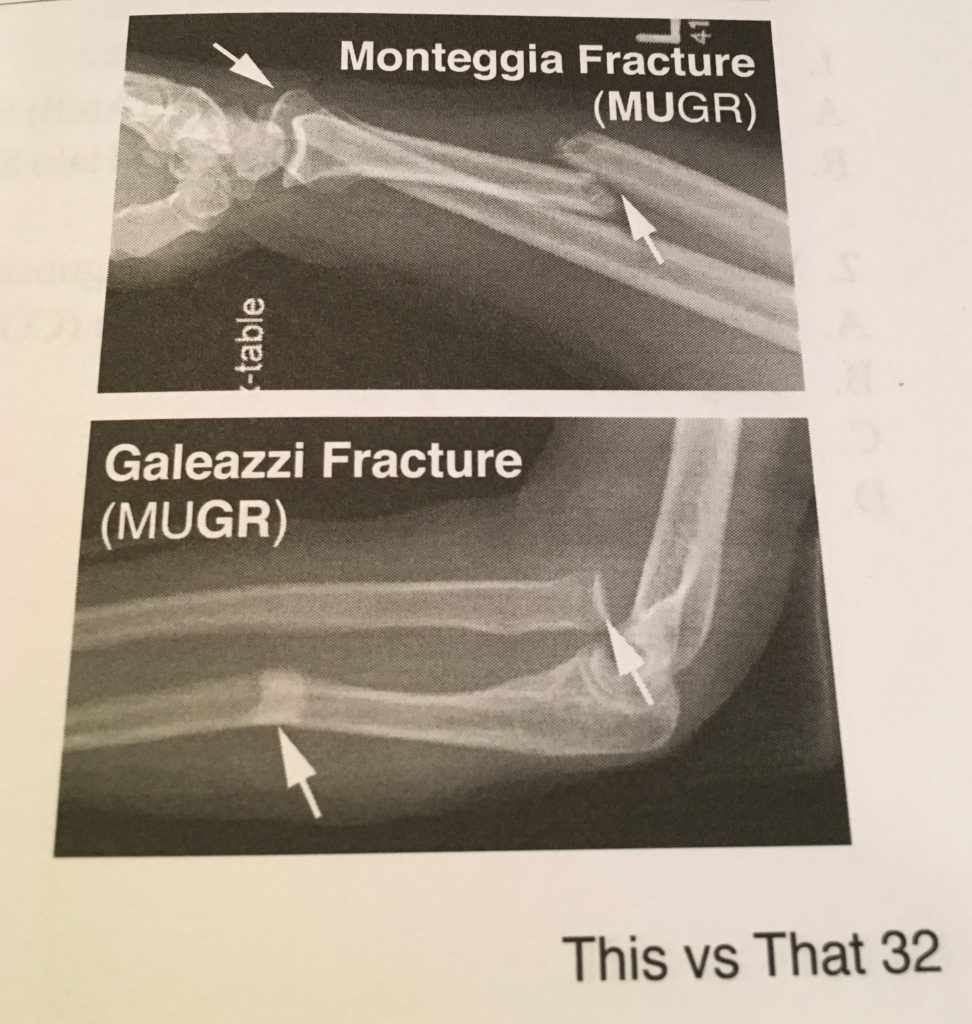 Getting Started in Radiology

The Limitations of Copy and Paste

Being “Backable” for Residency Interviews

Shallow versus Deep. Prolific versus Profound.