There are a bunch of folks going for PSLF asking if they should pause their auto-payments to avoid making an extra unnecessary payment. Yes, it’s possible you could get charged and then subsequently reimbursed if you have an early April payment as the servicers try to rapidly implement the law. Folks are already reporting that their payment due amounts are now showing $0, and the servicers have until April 10 to implement the new law. It’s also already been stated that all benefits will be applied retroactively, so delays will not impact you in the long term–but you being impatient and foolhardy could.

Personally, if going for PSLF, I would absolutely not make any active changes to save money upfront unless you absolutely need to cashflow-wise. I am deeply suspicious in situations like these that the more you mess with the more likely it is for something bad to happen, requiring more work on the tail end. PSLF requires on-time monthly payments; if you call and get placed on a forbearance due to trying to pause payments, then you will not be in repayment status and these months may not count. Or, trying to manually pause autopay and then make a manual payment at the last second if you don’t see an account update is a massive hassle and places an additional burden on a company that was already strained by its day to day operations before the pandemic. I would just wait and let the servicer do their job.

Outside of the CARES act itself, if you’re PSLF bound and your income has fallen substantially, consider recertifying your income now with pay stubs to lock-in lower payments for when the $0 period expires.

What is the impact?

For the non-PSLF-bound, it’s just a pause. You can choose to not make payments for six months (or more, it could always be lengthened later), and there will be no penalty at all. Nice flexibility, but it doesn’t really change the natural history of your loans unless you choose to continue making payments during the pause. If you are fresh off of a capitalization step like consolidation or the end-of-grace period, then you have no unpaid accrued interest and so any optional payments you make will go straight to the principal, which is neat.

For PSLF, how much this will save you in the long run depends on where you are in the repayment process.

Many folks consolidating at the end of school will earn $0 payments for their first year, so your monthly payments will not change. There will be no interest accruing for a while, but this will only be relevant should you eventually take a non-qualifying job. So, basically, it’s quite possible this will have literally no impact on you. This is, however, all the more reason to consolidate ASAP, because a full six month grace period could be an even bigger waste.

You will save a small amount of money because your monthly payments are generally low to begin with. Certainly not going to hurt, and it’s a good chance to take that extra cash and pay down any high-interest (e.g. credit card) debt you may have previously been unable to make progress on.

You will save a lot of money. An average physician debt holder capped at the 10-year-standard could easily save $12-18k thanks to six $0 qualifying payments during their high-paying attending years.

As always, the macro and micro don’t match the way politicians or most people would intend or anticipate. Payment pauses are just the minimum viable cashflow bandaid, a step that will ultimately do little for most borrowers nationwide, who already struggle with student loans at baseline with a 10%+ delinquency/default rate.

Meanwhile, while physicians and other high-earners are certainly not immune to job loss from the COVID pandemic, the actual monetary benefits of this policy disproportionately benefit those with large loans and large incomes.

It’s not enough to prevent an absolute economic crush on young Americans, especially if they are largely left behind in the recovery like they were in 2008.

Student loans–like so many other critical issues from our infrastructure and healthcare system to campaign finance and legislative reform–are crying out for a cohesive, coherent, and complete overhaul, and the developing public health and economic disaster should be a wake-up call.

I was very much looking forward to traveling to Las Vegas to speak at WCICON20 earlier this month but ended up unable to because of the whole devastating pandemic thing, but Jim and crew have released the conference e-course today. I and several other folks who couldn’t make it in person recorded our talks for inclusion after the fact, so there are over 34 hours of lecture worth 10 hours of CME.

Due to horrific computer glitch, I lost audio during my original recording and had to the majority of it again a second time while juggling my infant and 4-year-old, so I welcome you to check it out and see if you can feel the undercurrent of my electronically induced suffering. The struggle is real.

The course is included in the conference fee, so even if you went in person you should still check it out and hear the extra talks. I already enjoyed the talk from Morgan Housel (author of the upcoming The Psychology of Money) earlier today.

For everyone else, the cost is $100 off through April 21 with code CFEINTRO (which is already embedded in this totally monetized affiliate link).

Affluent conservatives often pat themselves on the back for having stable nuclear families. They preach that everybody else should build stable families too. But then they ignore one of the main reasons their own families are stable: They can afford to purchase the support that extended family used to provide—and that the people they preach at, further down the income scale, cannot.

For those who have the human capital to explore, fall down, and have their fall cushioned, that means great freedom and opportunity—and for those who lack those resources, it tends to mean great confusion, drift, and pain.

From conservative columnist David Brooks’ “The Nuclear Family Was a Mistake” in The Atlantic.

Even in medicine, we are seeing a disturbing trend. While the mean and median student debt are rapidly increasing due to high tuition rates, this is actually partially masked by the increasing percentage of medical students graduating with no debt. This suggests that a greater fraction of students come from means and have family support to cover medical school’s incredible cost. And those without that family support are either not getting in or are looking elsewhere.

It doesn’t stop at admission. These disparities and resource differences play out in specialty selection as well: 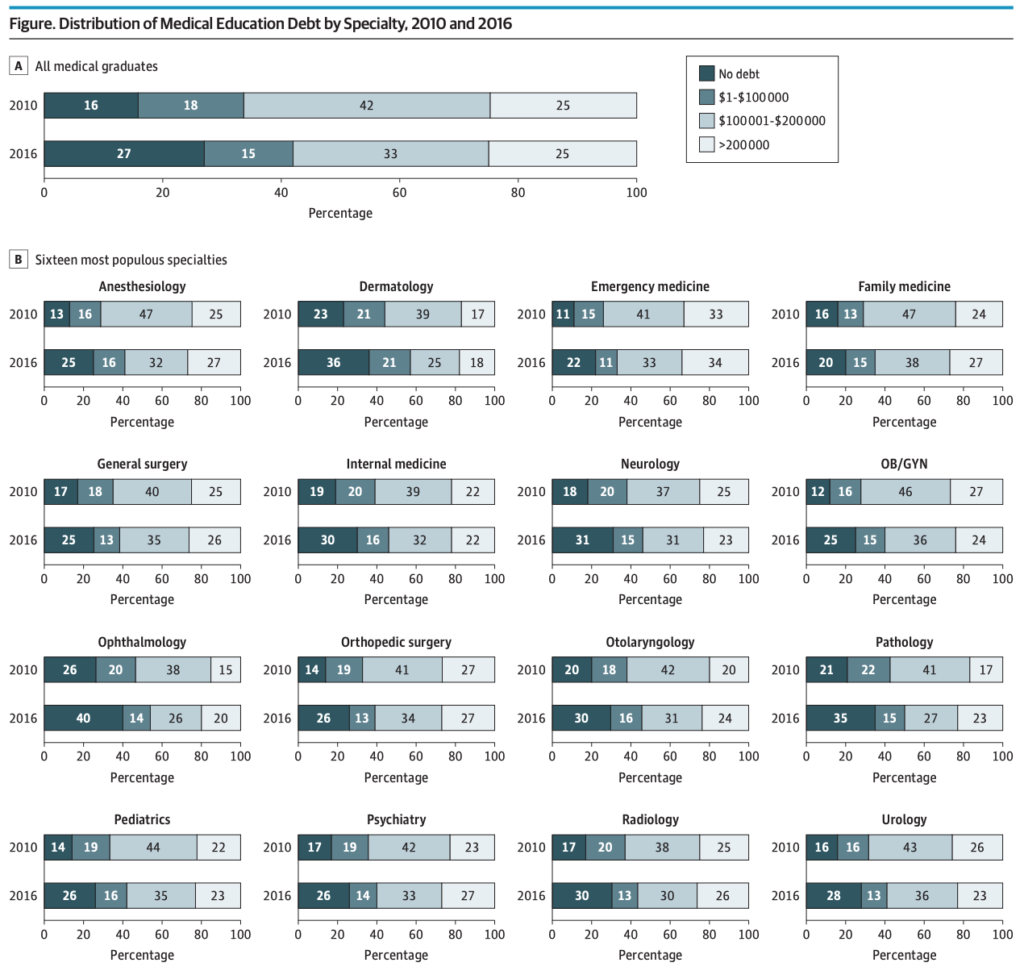 Over just a six-year period, the number of debt-free graduates almost doubled. And, overall, more competitive specialties like ophthalmology, ENT, urology, radiology have substantially more debt-free graduates than family medicine. Yet, we know we have a specialization problem in medicine. Free tuition at NYU isn’t going to change this massive headwind. The system needs retooling from far, far earlier.

I had a lot of fun talking to Dr. Jim Dahle on this week’s episode of the White Coat Investor Podcast about student loans:

I honestly think we may have talked more about my journey on this episode than I have with my actual writing on this site for the past eleven years, but I hope listeners found the contribution of another writer/blogger to be interesting  (also, don’t turn up the volume or you may hear my sniffles; kids…).

As Jim mentions, he actually started The White Coat Investor a couple of years after I started writing here. But he’s since built an impressive empire, steadily produced a ton of content, basically singlehandedly changed the level of discourse for physician finance, and taught/inspired a generation of young doctors to think critically about money. It’s just an incredible achievement.

I’m really looking forward to speaking at WCICON20 this March and meeting some of you there!

I published the first edition of Medical Student Loans: A Comprehensive Guide in 2017. Waiting almost three years to put out a print version is what happens in the perfect storm of total DIY, extreme retentiveness, and being a generally lazy procrastinator. Oops!

But I’m happy to say I finally put the finishing touches on the print editions for both of my loan books this month, so those of you hankering for the perfect beach read need wait no further:

But in what is surely a terrible business move, I’ve also put the entire text up online at benwhite.com/studentloans/.

So yes, you too can join the ranks of folks still exchanging money for that hard-fought knowledge (thanks!).

And yes, you definitely still download a nice ebook file in the format of your choice in temporary exchange for your email address so I’ll have a nice big audience for that infrequent newsletter I’ll probably never actually start. (PS I even put the unsubscribe link in the first sentence of the download email; did you know it actually costs a bunch of money to have an email list? Crazy.)

But if you just want to scroll through 45k words in a web browser, now you can do that too.

Student loans are crippling a generation of Americans and have a chilling effect on personal+financial wellbeing. I’m just trying to do whatever I can to help you get the information you need to make thoughtful decisions about managing your debt.