I am one of those supremely unproductive people who frequently spends hours researching distraction free writing programs and other workflow micromanagement with zero sense of irony. Nothing helps.

Anyway. One app I do use extensively is the Apple’s default Reminders app, which I’ve long used as both an actual todo list as well as a repository of other random tidbits, blog post ideas, things I want to read and buy etc. I’ve researched (and tried) several todo list apps, but none have stuck. Reminders is ugly, but it’s free, it works quickly, and has the features most anyone really needs. 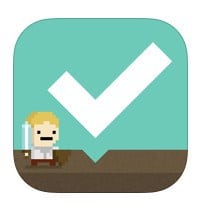 The overall scheme is similar to Clear (okay, it pretty much copies it), which I didn’t fully embrace, mostly because I thought Clear was colorfully ugly and I didn’t feel like importing all of my items. But Quest is cute app with great idea: it gamifies the to-do list, letting you “level up” for checking off items, with adorable graphics and simple gameplay elements superimposed on a solid todo list app experience. 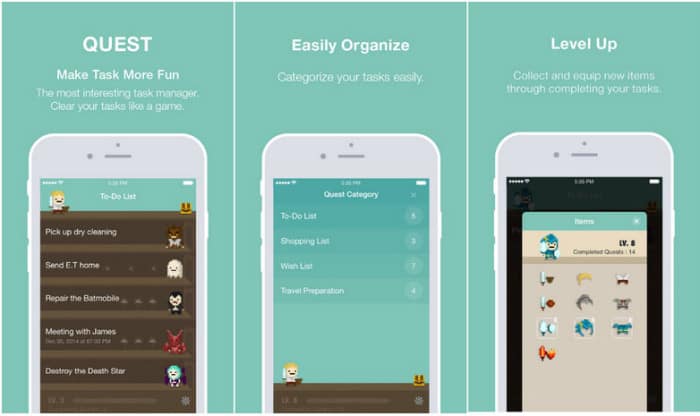 Quest allows you to organize your tasks into multiple lists as well as add time-sensitive reminders (just like to Reminders app). The main missing feature it lacks is contextual location reminders, which is a feature of the default Reminders app that has always sounded like a fantastic idea but that I’ve never actually used (e.g a reminder to give your wife a hug that activates when you get home).

My biggest feature request is the ability to grade the difficulty of your ‘quests’ — just as not all monsters are of the same difficulty to vanquish, completing your grocery shopping or calling a plumber doesn’t deserve the same experience/reward as crafting a thoughtful blog post or finishing a research manuscript. But I’ll still keep using it for the adorableness/nostalgia factor alone.